The guitar is definitely one of the most popular instruments worldwide. There are a few reasons why this is the case. First of all, it is relatively easy to learn how to play it, as it is a pretty intuitive instrument. Besides that, it is practical, so you can carry it anywhere you go, at the parties, when you travel… Also, it is not a very expensive instrument. For a few hundred dollars, you can find a great guitar that you can play for years.

There are three major types of guitar: acoustic, electric and classical. The acoustic and classical are very similar. The difference is that the classical guitar has nylon strings and a little wider neck. In the text below, we will analyze the acoustic and the electric guitar and see what are their specifics and similarities. So that you can have the right first guitar for your guitar lessons.

The most important thing about the acoustic guitar is that you don’t need an amplifier to play it. It is made of wood and has a soundhole which produces the sound.

Ok, now let’s see what the parts of the acoustic guitar are. 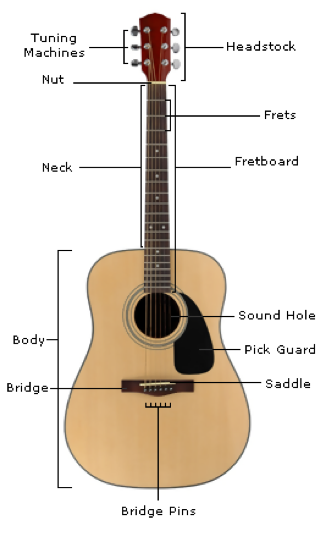 Headstock is the upper part of the guitar neck where the tuning machines are placed. With tuning machines, you adjust the pitch of the strings by tightening or loosening them.

Nut is a small element that is located between the headstock and the neck. Its job is to support the strings, going from the headstock to the saddle. It is usually made of bone or plastic.

Neck is the element that connects the body and the headstock. The upper side of the neck is called the fretboard. It is where the strings are placed and where you actually play the guitar by pressing the strings.

Frets are the separate spaces between the metal bars on the fretboard. When you want to play a note, you should press the string right in the middle of the two metal bars. This is how you will get a clear tone, without any buzz produced by the metal bars.

Body is the largest part of the acoustic guitar. It is a hollow wooden box with a sound hole that acts as an amplifier and produces the sound when you strum the strings.

Bridge is placed on top of the body and its function is to transfer the vibration from the strings into the body and thus, the soundhole. On the bridge, there is a saddle. It has the same function as the nut, only on the other end of the guitar.

Pickguard is a cover on the guitar body used to protect it from being scratched by a pick.

Bridge pins are the holes where the strings enter the body.

Unlike the acoustic and classical guitar, the electric one can’t be played without the amplifier. More precisely, you can play it but it will be very quiet, so you will barely hear what you are playing. Because it doesn’t have the soundhole, these guitars have built-in magnetic “pickups” (also called magnets) that pick the string vibration and transferee it into the electric potential.

I should mention that the acoustic and classical guitars can also have a pickup. If it is placed under the saddle it is called the piezo. These guitars are usually referred to as semi-acoustic or electro-acoustic.

Being the same instrument, the electric and acoustic guitars basically have the same parts. However, there are a few additional parts of the electric guitar that we should mention.

Pickups are magnets that transform string vibration into electrical current, which is then transferred into sound by the amplifier. As there is usually more than one magnet, you can use the pickup selector in order to activate different magnets.

Control knobs are used for controlling the loudness of the guitar signal and for the adjustment of high and low frequencies.

Output jack is the place where you insert the cable in order to connect the guitar to an amplifier.

End pin is a hook on which you attach the guitar belt.

One of the most common dilemmas of my students is whether their first guitar should be the acoustic or the electric one. I always suggest them to go with the electric.

If you would like more in depth knowledge on picking your first electric or acoustic guitar, then check out our guide on our website Guitar Tuition East London. Where I go through all the different guitars with pictures to help you pick the right guitar for you.

Guitar Tuition East London provides electric and acoustic guitar lessons in London, to adults and children. Designed to be innovative, fun and creative. Students are encouraged to express themselves through music as a new language. Which helps them to communicate and interact with other musicians.